I don’t feature authors too often, unless I can’t help myself because they’re just so darn wonderful. Carole Anne Carr is one of those authors. Carole writes children books that my grandchildren love. And we all know you can’t fool a child when it comes to good storytelling.
Enjoy, these are exceptional reads… 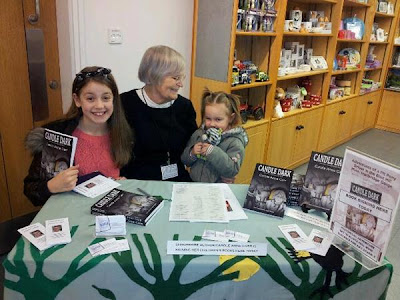 Carole Anne Carr is an author and independent publisher of four children’s books: two historical fiction, one fantasy, and one picture book.  Her early years were spent as a bank teller in Africa, then as teacher, owner of an art and craft business, poet, creative writing tutor, actress and Third Order Franciscan. She held the Office of Reader in the Church of England before beginning her writing career.  She’s working on sequels to her children’s books.  She’s taught poetry and other aspects of creative writing, been Deputy head of a Shropshire primary school for nearly twenty years, and she’s a member of the Society of Authors, the National Association of Writers in Schools, and W.I. Speaker. 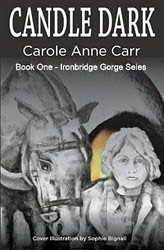 Candle Dark
Book One – Ironbridge Gorge Series
– a children’s historical fiction adventure story set in a Victorian mine that is being promoted as a free eBook from the 6th to the 8th July inclusive – Pacific Standard Time.
Joshua was nearly eleven and he worked down the Blists Hill coal pit in the Ironbridge Gorge and he hated it down there. He hated working in the dark, he hated the rats and the stink of the tunnels, and he especially hated it when the mine flooded and his boots got soaked and rubbed his feet raw. Then the day that Mr. Bradley the horsekeeper gave him another beating so bad he ached and ached all over, he made up his mind to run away and find work on the Severn trows. But what would happen to poor Drummer, left behind in the dark? What would happen to his mother, left to the mercy of the evil Isaac Whitlock? And how could he sail to Bristol when his father had been sent to work in the most dangerous part of the mine? Afraid of the river gangs, and sick with worry about his dad, Joshua must decide whether to run for his life, or to stay in Coalport and protect his family despite the terrible danger.
(the sequel – River Dark – to be published in September 2012)

First Wolf
Book One – Wolf Series
– a children’s quest adventure story is set in 8th century Northumbria that is being promoted as a free eBook on the 12th and 13th July – Pacific Standard Time.

It was Toland’s twelfth year of life when his father hurled the wolf’s head at the mighty Eorl Uhtred, bringing his childhood to a violent end.  These were dangerous times, with people driven from their settlements, tribal wars, and bands of robbers on the roads, but Toland must keep his solemn promise to save the Lindisfarne Gospels from the Vikings, protect his family, and find his father.  With his faithful hound Bodo, he sets off on his quest through Anglo-Saxon Northumbria. Surviving the first Viking attack of Lindisfarne, his many adventures lead him to the mysterious hermit on Inner Farne, Bamburgh fortress, the slave girl Kendra, the mystery of the stolen jewels, a blood debt, and a terrible discovery at the White Church…..
Link for purchase: http://www.amazon.co.uk/First-Wolf-ebook/dp/B004P8JT7S
http://www.amazon.com/First-Wolf-ebook/dp/B004P8JT7S
Carole Anne Carr – Children’s Author
B.Ed.Hons.(PrimaryEd), Dip.Ed.(Medieval History), HDTheology, HD.Child.Lit.(Open), Office of Reader – Church of England (WEMTC), Member of The Society of Authors, Nat. Assoc. of Writers in Education, National Children’s University (Shropshire), Society of Storytelling, Women in Rural Business, Shropshire Chamber of Commerce, W.I. Speaker Author of First Wolf, Little Boy Good-for-Nothing and the Shongololo, Candle Dark, Thin Time, River Dark http://caroleannecarr.co.uk