Today I’d like to introduce you to a new author, Jack Lewis Baillot, and his novel HAPHAZARDLY IMPLAUSIBLE! Please give Jack a warm welcome. Merry Christmas, Jack! 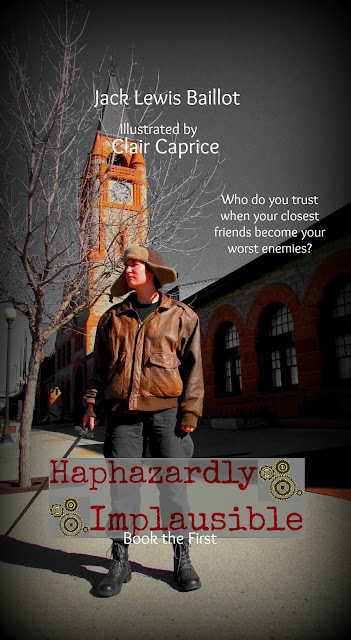 Everything in Peter rebelled at Tony’s words. He trusted the general with his life. When his parents had abandoned him, it was the general who took him in and raised him. The general loved him more then his own father had, and now Tony wanted him to believe this man wanted him dead. His head spinning, Peter slowly sank to the ground, unable to keep his legs under him.

Three unlikely heroes. A world teetering on the edge of war. A mad man who will stop at nothing to gain complete power.

Peter Jones, an Aeropilot in the Scottish Royal Air Force, has grown up believing his parents abandoned him. Isidore Thaddeus Reichmann, a famous Detective running from his past, is trying to save the last person he cares about. Singur, an Inventor who has been forced to hide his real name his whole life or risk being killed, holds an important secret.

Little do they know their lives are about to entwine and that together they have the power to save the world from complete destruction, or destroy everything.

Loyalties are questioned. Friendships are betrayed. Trust is shaken. Who do you turn to when the friends you’ve always relied upon become your worst enemies?

I would like to thank Joylene for helping in spreading word about my book! (I need all the help I can get and it is great when fellow bloggers and writers help out.*Grin*)

My book, which is out now actually, is in fact my first attempt at Steampunk. When I began it, I had no idea what I was getting myself in to. (I just wanted to write something with airships.) When I wrote the first draft, in fact, I had no real villain. It wasn’t until the second draft I sat down and plotted him out.

I am wary of writing villains. I wanted mine to have a purpose, I also wanted him to be terrifying, but not the type of man one would look at and think, “He’s a bad guy.”

It took a lot of work to get him just how I wanted. Mostly because I wanted his main goal to be world domination. And when a villain is out for that the first thing that comes to mind is James Bond villains or some wacko who rubs his hands together, cackles, mutters under his breath, and has henchmen who can’t aim. All things I wanted to avoid.

The first step was in making my villain believable. Could I work with the world domination plot and still make him fearful? If so, how? What was it about the other world domination villains which made them unbelievable?

Once I had these worked out, I set about applying them to my villain. The main thing I learned? He had to be ruthless. When he actually gets the hero in his grasp nothing hinders him from shooting him on the spot. No monologue, no explaining his plans. Nothing. (If the hero wishes to live he can’t wait until the villain ties him up and leaves before making his daring escape. It isn’t that easy this time.)

After all, the villain is just as important in a story as the hero and he has to be just as real and convincing. What would a man do in his place? Would he tell the hero about his next move, or would he just shoot him to get him out of the way? (And with these questions answered, there are a lot more options open.)

Thank you, Joylene again for helping in spreading the word!

My book can be found at Lulu publishing, as well as Amazon and Barnes and Nobles. It is in both paperback and ebook format. You can learn more about it here. http://missjacklewisbaillot.blogspot.com/