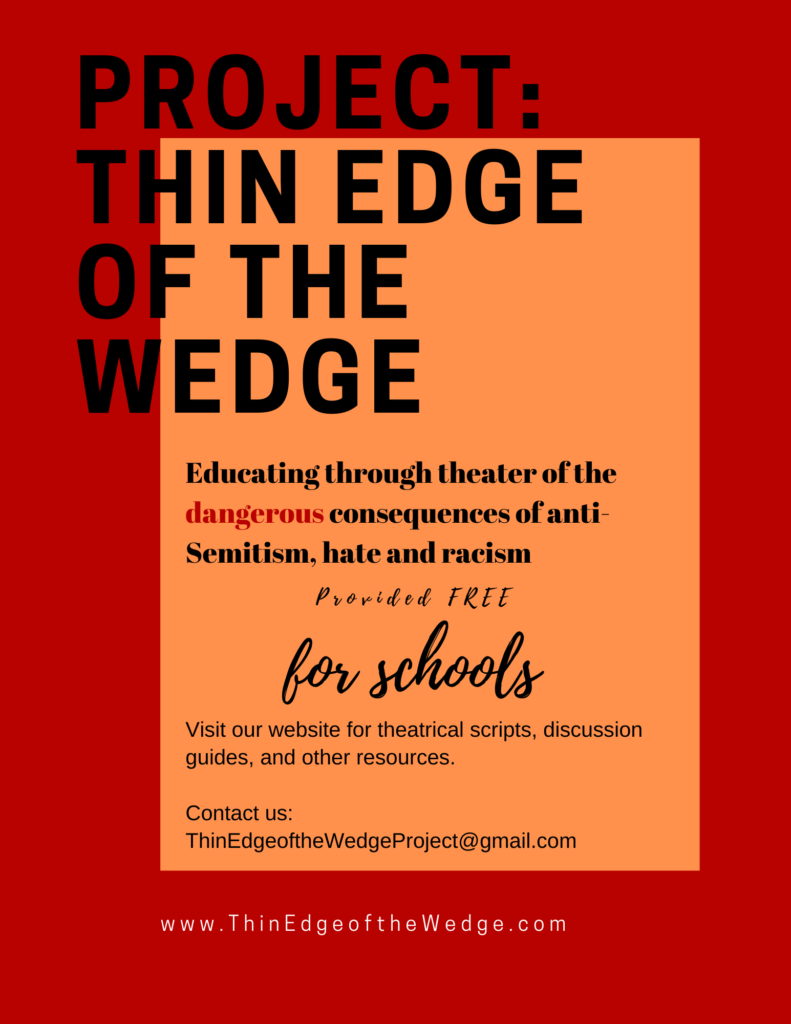 Learning From History Part II: What the Holocaust Can Teach Us for Today

In my initial post last month for my re-appearance on Joylene Butler’s blog, I wrote about movies as a way to learn history wrapped up in entertainment, discussing both the new WWII movie 1917 and the Norwegian WWII film THE 12TH MAN.

This month I want to discuss using nonfiction to create compelling connections to what has happened in the past as a caution against what can happen now or in the future.

My husband, an Army officer, and I were stationed in Munich, Germany, from September 1970 to May 1972. As Jews living in Germany only 25 years after the end of WWII, it was an eye-opening experience.

Upon our return to the U.S. I became an editor and reporter of the monthly Friday Forum literary supplement of the weekly Jewish Exponent newspaper in Philadelphia. I published firsthand accounts of Holocaust survivors and saviors.

The THIN EDGE OF THE WEDGE play project:

One and a half years ago I said to my friend and frequent writing project collaborator Susan Chodakiewitz that I felt badly that these particular accounts were lost to history because they were published before the internet. Susan said, “Why not write a play of these accounts?”

And that’s what I did – rewriting and rewriting, choosing which firsthand accounts fit into a timeline of the historic events leading up to Nazi Germany invading Poland on September 1, 1939, and the actions of the Nazi regime intent on murdering every Jewish man, woman and child in all Nazi-occupied territories along with murdering other “undesirables.”

Susan worked alongside me to craft compelling sequences in the play and to develop free content (selected reading list, discussion questions, etc.) to accompany this project. As we worked – and as the rise of anti-Semitic incidents in the U.S. and elsewhere increased dramatically – we realized that this play should be a free theater project for middle and high school students.

In contrast, for example, to elementary and high schools in Germany, where education on WWII and the Holocaust starts at a young age (7 or 8 years old according to one friend of mine in Germany), Holocaust education for high schools is only mandated in a very few states in the U.S. This means that the majority of young Americans have no idea of how one step led to the next step led to the next step until it was too late to stop.

This understanding of how name calling can lead to beatings to concentration camps to murder is particularly important now. Young people need to learn to be aware of what can happen if, instead of standing up, they allow things such as bullying on school playgrounds to escalate until it is too late.

To this end of educating our young people, I’m asking the readers of this blog post to go to www.ThinEdgeOFTheWedgeProject.com and check out the free resources available for schools. Then, if you know of educators who might be interested in this free project, do share the resources with these educators.

As Americans concerned about the present and the future, we need educated youth who understand what can happen if they remain bystanders. As the Museum of Tolerance in Los Angeles teaches, bystanders are NOT innocent.