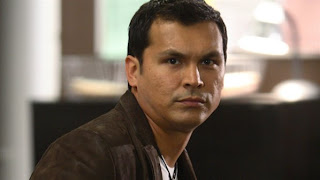 We [authors] all dream about our novels being the next big thing. It’s only natural to hope our efforts produce something fabulous. So, when Adriana Ryan asked me to participate in THE NEXT BIG THING blog hop, I said “Of course. I’m there!”

I’m an author, I want the world to know about my books. Besides, it gives me an opportunity to tag five other writers to participate. What’s extra special is they’re like me, they write suspense novels. We’re a small group, at least it feels that way, so any chance I have to help them promote their work is the highlight of my day.

Okay, so here’s what you do. Answer ten questions about one of your works, either a book or WIP, doesn’t matter. Today I’m sharing my next book which is now in the hands of my publisher, the sequel to “Broken But Not Dead”. The photo to the left, curtesy of Law & Order, is Canadian actor Adam Beach, who I believe would be a perfect Danny Killian, my protagonist. Such a cutie. I picked the photo because Danny’s intense and a little sad.

1. What is the working title of your book?

2. Where did the idea come from from the book?

After I finished Broken But Not Dead, one of the characters, Sally Warner, wouldn’t leave me alone. Strange as this sounds, it felt as if she were stalking me. Days, weeks, months, she hounded me, saying stuff like, “You’re not going to leave me like this, are you? You can’t. I have a story to tell!“

I won’t spoil it by saying anything else. Except, after seven months of her constant nattering, I sat down and started writing her story. How worse could her life get? Well, let’s see. What if on a cold fall morning, she finds her husband, retired Minister of National Defense, dead on their kitchen floor. He‘s been shot by an unknown assailant. The police are worried she’s the next victim.

3. What genre does your book fall under?

4. Which actors would you choose to play your characters in a movie rendition?

5. What is the one-sentence synopsis of your book?

Can the developing friendship between a cop and a suspect ruin both their lives?

I’m going to give this more thought, but for now this pretty well covers it. Okay–Okay, I’m hoping one of my editors comes up with the synopsis. I hate writing these things. Tried to get Alex Sokoloff to write it, but she kept giving it back to me. Shish.

6. Will your book be self-published or represented by an agency?

Good question because I’ve done both, and I choose a publisher, for so many reasons. A topic for another day.

7. How long did it take you to write the first draft of your manuscript?

Prior to buying my Mac I had so many computer crashes that I’m no longer sure. But if I had to guess, I’d say 5 months. That does not include the seven drafts. Or the 10 revisions I did with the help of my line editor, copy editor, and final draft editor.

8. What other books would you compare this story to within your genre?

9. Who or What inspired you to write this book?

Two things, my Metis heritage and my concern that there aren’t enough books about 50-something women. Particularly strong native women.

10. What else about your book might pique the reader’s interest?

The story takes place in small-town Canada where there has always been an underlying tension between Aboriginal peoples and the white establishment. During the time it took to write Omatiwak, by the way, that’s Cree for Woman Crying, a task force was investigating the disappearance and murders of dozen of women on the Highway of Tears. It’s an ongoing theme throughout the book that haunts my protagonist, RCMP Corporal Danny Killian.

Now comes the part where I get to introduce you to 5 talented suspense writers.