Because Christmas is a time of giving, it gives me a great deal of pleasure to introduce Adriana Ryan and her novel World of Shell and Bone…

World of Shell and Bone
By Adriana Ryan
In a world ravaged by a nuclear holocaust, Vika Cannon knows there are no guarantees: no guarantees of safety, no guarantees that your neighbor is not actually a spy for the government, and no guarantees you’ll be allowed to emigrate to a new life in Asia.
New Amana is dying. Food and water are scarce, and people suffering from radiation-caused mutations—the Nukeheads—are the new class of homeless.
Vika has just one purpose: to produce healthy progeny using a Husband assigned by the Match Clinic. Unhealthy children are carted away to Asylums to be experimented on, just as Vika’s little sister Ceres was, eight years ago. Parents incapable of producing healthy progeny are put to death in gas chambers.
When she’s assigned a Husband shortly after her twentieth birthday, Vika expects him to be complacent and obedient. But Shale Underwood has a secret. He is a member of the Radicals, the terrorist group intent on overthrowing the government. And Shale has information about Ceres.
As she learns more about the Rads’s plan, Vika finds herself drawn to Shale in ways she’d never imagined. When freedom calls in the way of a healthy pregnancy, will she betray her government and risk death for Shale and Ceres? 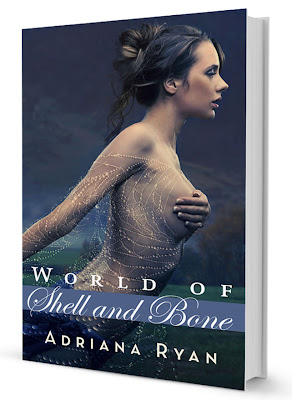 Why did you write this book and what do you hope readers will take away from it?
There’s a pretty famous Toni Morrison quote: “If there’s a book that you want to read, but it hasn’t been written yet, then you must write it.” That sums up the “why” part of the question really well. I wanted to explore a world where females had been given power. The society Vika Cannon, my protagonist, lives in is feminist and supposedly forward-thinking. But as you go along in the story, you discover why that’s not true and how things have come to be as they are.
I hope that readers will see how too much of a good thing can turn bad really quickly. While it’s absolutely essential that those who’ve been historically taken advantage of be given the authority and power to speak out against their oppressors, there is a very real danger in vilifying your oppressors as well. We risk losing our humanity in the face of our indignation, which, I think, is what a lot of the great civil rights leaders of the world, like Gandhi and Martin Luther King, Jr. wanted people to realize.
I also hope readers see that there are many different forms and kinds of oppression. Vika’s world is one of sub-societies and second-class citizens. I think we could draw parallels to the world we live in today, but many times it’s easier to not think about those issues.
And finally, I hope readers are able to connect with Vika’s vulnerability, courage, and hopefulness. Those, to me, are universal traits, and I tried hard to capture them in World of Shell and Bone. More than anything, I hope Vika comes alive and really speaks to readers in a way that’s personal to them and their truth. 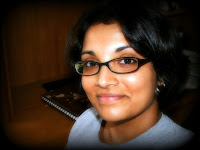 Adriana lives and writes in beautiful Charleston, SC. A huge fan of spooky stuff and shoes, she enjoys alternately hitting up the historic graveyards and outlet malls. World of Shell and Bone is her first book.
Reach Adriana at her website, Twitter, Facebook, or Goodreads.
Buy World of Shell and Bone at: Amazon and Barnes and Noble. Kobo, Sony, and iBookstore will follow soon!